The Top  Specialties Of Cretan Food

Known as a “kebab” to us in Australia. A souvlaki is a skewer of meat (usually chicken or pork) and sometimes grilled vegetables. As a main dish, it is usually served with french fries, pita bread or roasted potatoes.

I think these taste better at 2am than they do on a regular day but either way, they are a very cheap way to grab a bite to eat in Greece (2.50-4 €). You can get them in a pita or served on a plate with either pork or chicken and sometimes vegetarian. Don’t forget to ask to be generous with the Tzatziki, it makes all the difference

Moussaka is an eggplant or potato-based dish that often includes ground meat and a touch of cinnamon. It is a very popular dish to eat in Greece and almost every menu will have it on there. In Greece, they include both layers of meat, eggplant and potato before topping it with a Béchamel (white) sauce. It is then baked and served in a clay pot.

Deep fried cheese? Is there anything more delicious! Saganaki is usually graviera, kefalograviera, halloumi, kasseri, kefalotyri, or feta cheese. The name comes from the type of pan that the cheese is cooked in. It is usually served with lemon juice and bread. 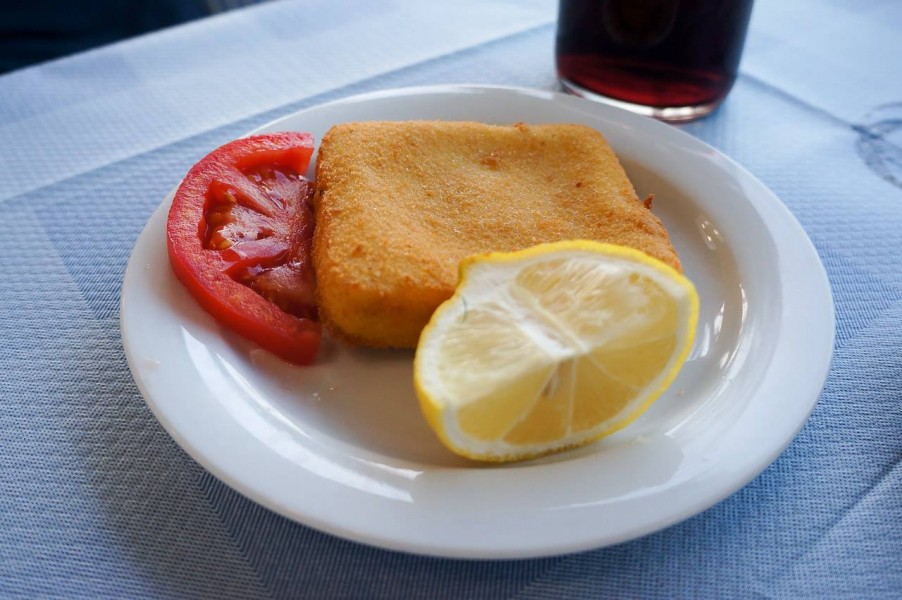 Ntákos, otherwise known as“ Koukouvágia” (owl), is a traditional Cretan Food based on barley rusk. On the rusk there is rubbed tomato and the Cretan cream cheese “myzíthra” while the dish is complemented by olive oil, salt, oregano and olives. It’s a quick and easy dish that offers a complete and nutritious meal.

Stamnankáthi are herbs that have a bit bitter but pleasant taste. It is a type of special and it is very difficult to gather. This plant grows only in Crete. It is usually served boiled, with olive oil and lemon and it can also be combined with eggs or meat.

Chaniotiko bouréki is a special zucchini-potato pie made especially in Chania. The basic ingredients are zucchini (pumpkin variety), potatoes and myzíthra cheese (a type of Cretan cheese). All these may be covered by a sheet of pastry. So if you are planning to visit Chania, do not miss the opportunity to taste this delicious summer dish!

Snails or “choclioi” is the most popular dish of the Cretan diet!  This traditional Cretan recipe is combined with rakí, the traditional local drink and good company. The word “boumpouristoí” comes from another Cretan word, the “ampoumpoura” meaning “prone”.  Snails, after dipped in flour, are fried in olive oil and accompanied by rosemary and vinegar.

This traditional dish of western Crete has migrated across the island, because of its delicious taste. Its basic ingredient is Cretan goat or lamb, cooked in olive oil. The meat is of high quality and it is cooked at a very low temperature for a long time. Years ago, the locals used the meat of the Cretan wild goat known to most as Kri-Kri, in order to make this Cretan food. Today Kri-Kri is a protected species as it threatened with extinction so its hunting is banned.

This dish is a traditional custom that is served at weddings. The rice, which is called “piláfi”, is cooked in broth of meat that is already boiled, usually lamb and chicken. The older animals give the most delicious broth. The rice is cooked with butter and lemon. Serve with boiled meat, which is very lemon, salt and pepper. This simple recipe owes its taste to the good quality of meat.

The “apáki” is made from pork in Anogia of Crete. It is first marinated for two or three days in strong vinegar made of Cretan wine. Then it is smoked with aromatic herbs and wrapped in a layer of spices and herbs in order to obtain aromatic taste. It can be eaten as it is or to warm up for a few minutes in the pan, in the oven or on the grill. It can even be added to an oily food such as green beans or bean soup or used on pizza instead of other meats, giving it a great flavor.

12) Cuttlefish with Fennel and Olives

This Cretan specialty is one of the most traditional Cretan foods. It is usually cooked during Lent, a period that fennels grow in the Cretan countryside spreading their wonderful aromas. Cuttlefish with fennel is an incredible delicious combination, complemented by the olives with their slightly sour taste. Whether you choose wine or ouzo to accompany this dish, you will definitely enjoy it.

Kaltsoúnia is one of the desserts which are very often served at the end of a meal in Crete. It is a traditional Cretan recipe, found throughout the island, with many different fillings. In “Apokries” (Halloween in Greece), the Meet week is followed by the Cheese Week. Housewives prepare foods and sweets from dairy products and offer them as retreats to their friends. The ability of Cretan cuisine to combine the unique Cretan cheeses with excellent thyme honey, is magic. Kaltsoúnia are made of “myzíthra” cheese or greens and herbs and wrapped in pastry. Those containing cheese are usually panned and served with plenty of honey and cinnamon.

Marathópita is a delicious pie, cooked with a little bit oil in the pan. It is a traditional Crete food but can be found throughout the island. The pie is filled with fresh fennel, which gives wonderful flavor to this recipe. Spinach, sorrel and fresh onion are usually added in the pie.

To elevate your appetite and flavor, you can combine your Cretan meal with a glass of Cretan wine or rakí !

Tzatziki is a Greek sauce made from strained yoghurt mixed with cucumbers, garlic, salt, olive oil (surprise surprise). This can be added to meats, pita bread, rusks or used as a dip for fresh vegetables. Be prepared for the lingering garlic taste afterwards 😉 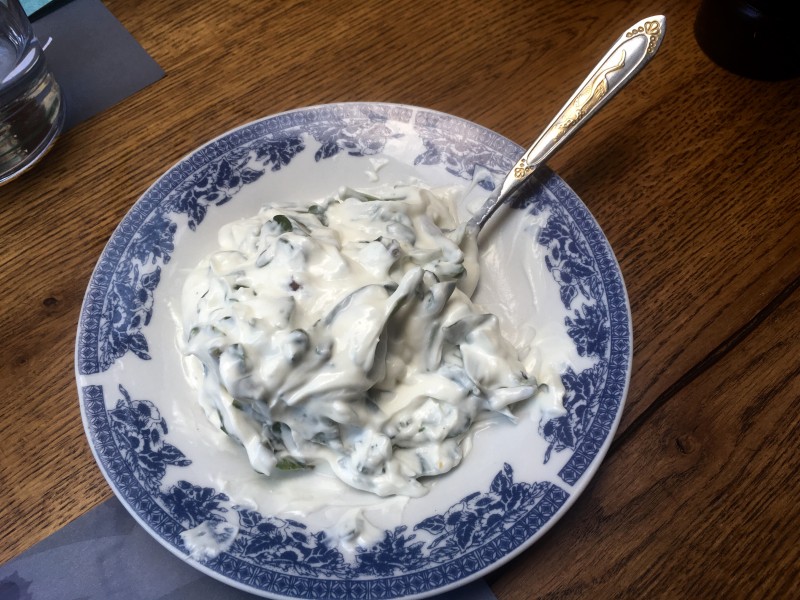 There is certainly no shortage of cheese in Crete. I think we had it with every meal but there is absolutely nothing wrong with that.

I first noticed the difference when the Greek Salad I ordered came with a local soft cheese as opposed to the classic feta cheese. Don’t panic, feta is still widely eaten in Crete! 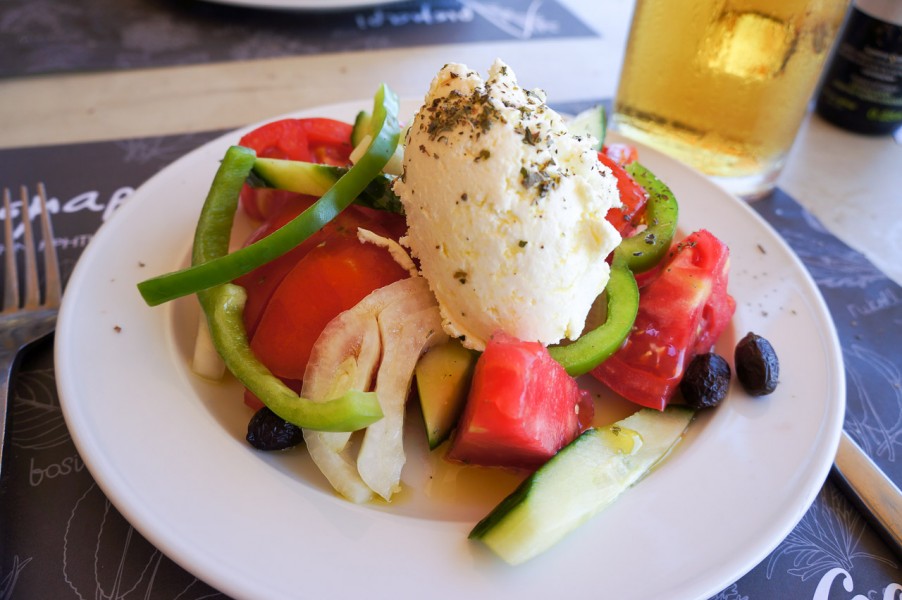 The most popular cheeses eaten in Crete are:

Sheep’s cheese-filled pastries fried in olive oil and served warm with a sprinkle of honey on top. They get their name from the shape of the scarf the local men wear on the west of the island. 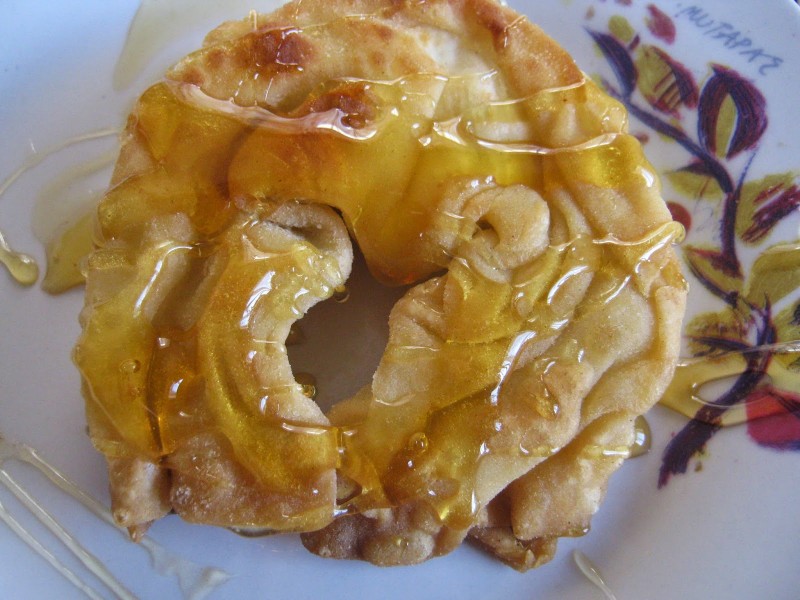 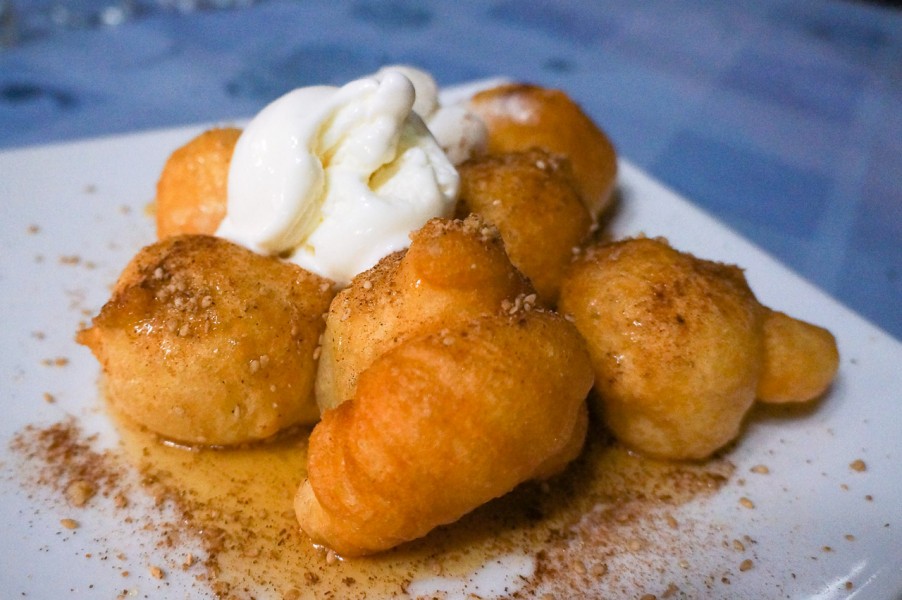 Loukoumades are fried dough served with ice cream, nuts & honey. After we had already finished our 3-course meal, the restaurant we celebrated our wedding anniversary at comes out with this dessert “on the house!”. Sure enough, we finished the entire thing in record time. It would be rude to waste it…wouldn’t it?

This salad is quite similar to the classic Greek Salad however the Cretan Salad is served with a soft cheese as opposed to Feta and with Paximadi. Depending on where you eat it there can be a few added extras such as zucchini, egg, potato. There are usually at least 2 whole tomatoes along with it… 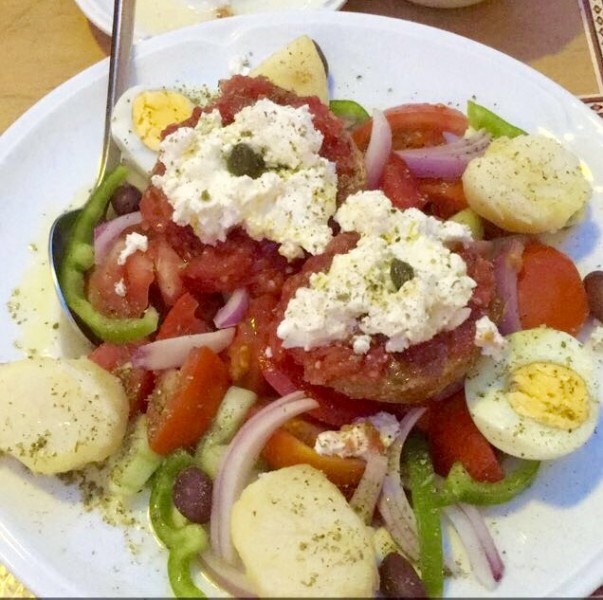 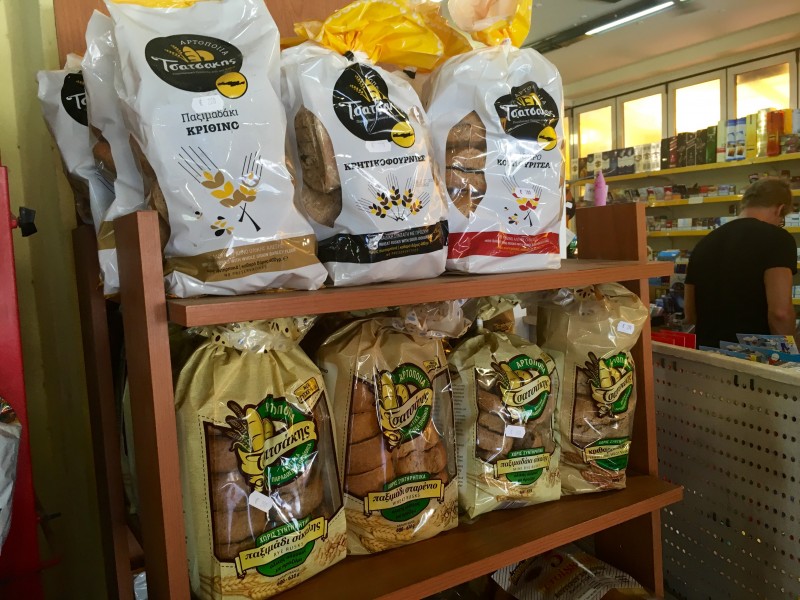 Paximadi, also known as rusks are the traditional Cretan way of preserving bread for a long time. These small hard pieces of bread are cooked over and over and are softened when water or olive oil are added to it. You will find them in various shapes & sizes. They can be made from wheat or barley, with or without yeast, sourdough or whole grain. These are the base for the “dakos” we mentioned above and are often served before your meal. Douse it in olive oil and give it a go!

Raki is an alcoholic beverage that is served after a meal in Crete, usually on the house. It is made in Autumn after the grapes are harvested. It comes from by-products created from the wine making process. Once the grapes are pressed and the juice is stored to begin fermenting, you’re left with a lot of “leftovers”. Without letting anything go to waste, the remainder of the skins, twigs etc are stored for around six weeks before it is distilled into Raki. Tada, now you have Raki. 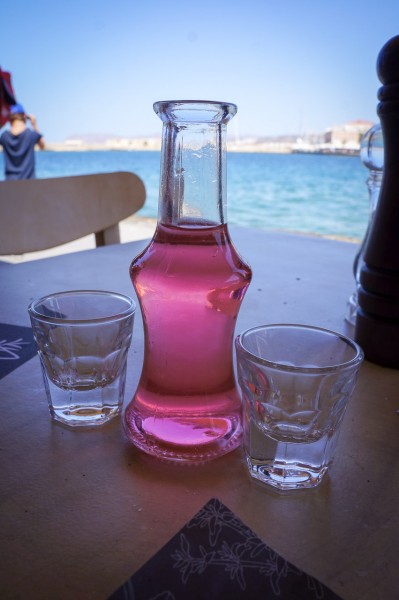 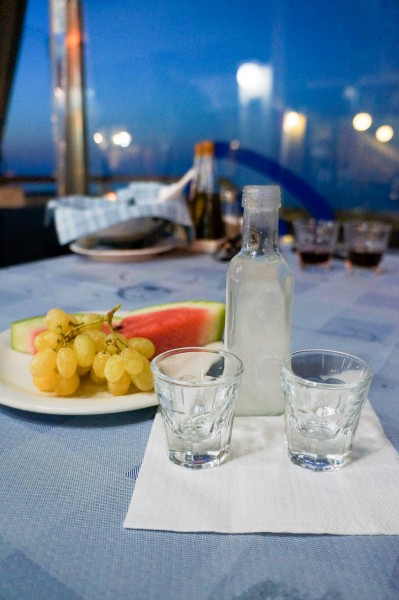 In the grocery store, you can find it in clear bottles that can easily be mistaken for water. If we were honest, the taste is not amazing. The flavoured raki is much more enjoyable to drink, our favourite being pomegranate and least favourite, rose. The rose raki tastes like you’ve drunk the bath water after soaking in rose petals for 24 hours. 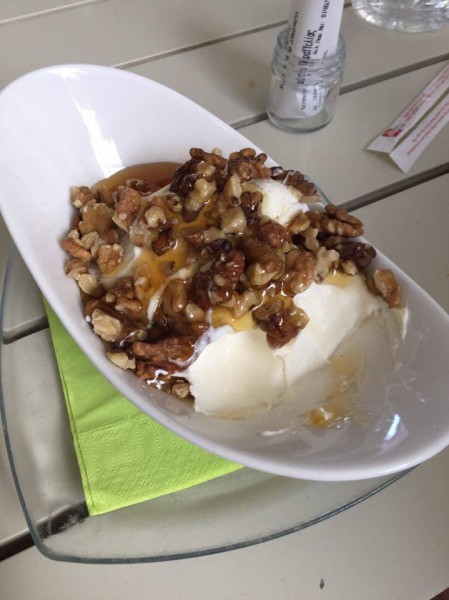 Yoghurt and fruits are our staple breakfast wherever we are in the world but my gosh, the yoghurt that Greece produces is #1. We went through almost 5kg of Greek Yoghurt in the 2 weeks we spent on the Island and never once did we get tired of it. In fact, I was trying to find a way to smuggle some into Nepal! Top your yoghurt with fresh fruits, nuts and honey bought from a local producer and you’re good to go.. Ahhh so good.

Olive oil is referred to as ‘Liquid Gold’ in Crete. Nothing is cooked without it. Meats, salads, cheeses, vegetables & bread. Everything is doused in it and it is phenomenal. Driving back from our day trip to Elafonissi, we could smell the olives for km’s. You can buy Olive Oil from absolutely everywhere and in all different shapes and sizes. Whilst most souvenir stores around the world are selling shot glasses, sweatshirts or magnets, in Crete you’ll find shelves and shelves of Olive Oils. It’s a perfect souvenir to bring back for family and friends. 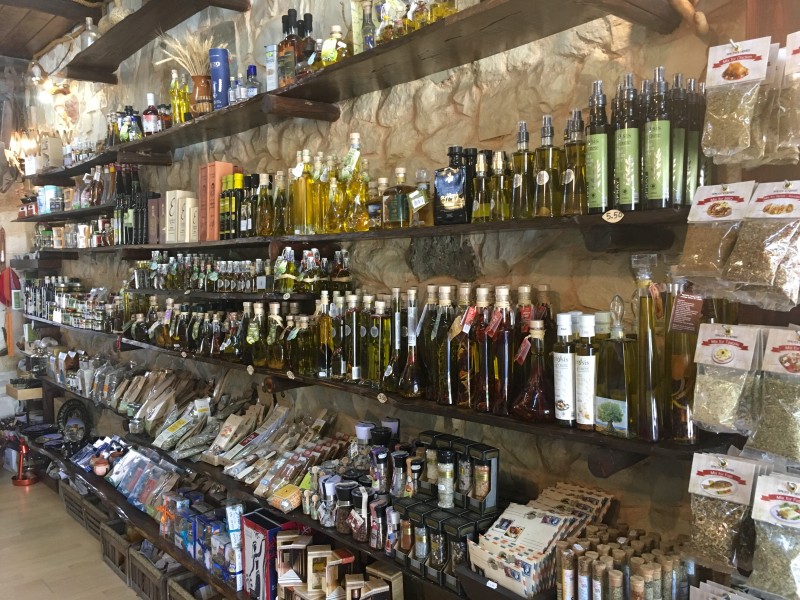